The joke was on me for believing that great numbers on Facebook mean power. How I envied any writer who had 5000 Friends! When I cracked my first 1000, I wanted to stand on a rooftop like Jimmy Cagney and roar: 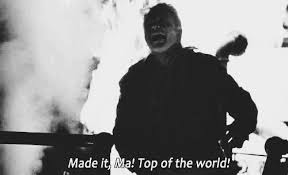 Aside from family and a few personal friends, my Friend base consisted of:
95% writers
5% readers and fans.

Of the writers, at the start, 98% were horror writers. Though I hadn't written horror since my fourth Kelley Wilde book in 1993, I craved the communal sense. But nothing ever came of it and I saw that it was an illusion. I had little interest in horror fiction and these friends, in return, had no interest in my new direction despite my Sizzling Sales Events.

After a half-dozen years on Facebook, I needed to re-evaluate the size and makeup of my Friend base while improving my use of the platform. I've decided on these strategies:

Base Size and Makeup
1) Reduce from 2500 to 1500 a.s.a.p., then prune this down to 1000: writers, readers and people with whom I share some common ground and will keep in touch with on birthdays, event days, occasional whatever days.
2) Within the thousand, choose a hundred as the core and nurture these friendships with care.
3) Within the hundred, select ten tried and tested, rare vintage souls as the heart of the core.
4) Create a beautifully proportioned mix of writers from all genres: Horror, to honor my roots, but also Mystery, Crime, and Literary fiction. 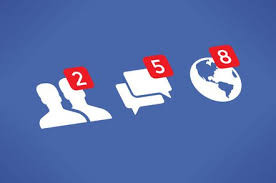 Guerilla Tacks for Non-Gorillas
If you're a Gorilla like David Morrell, James Patterson, or Stephen King, you can have 5000 FB Friends who'll buy your books and ask nothing more of you than the honor of being your Friend. With your Author Page then you can add thousands more. If you're a Gorilla In Training, you'll need a secretary to help you build your base while feeding FB and Twitter non-stop entertaining fluff to keep your name in view. 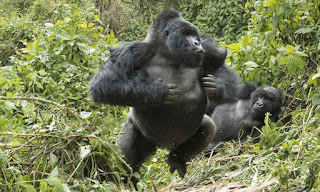 Otherwise, guerilla tactics will help you satisfy a thousand while freeing you to properly nurture the hundred and ten.
1) When my list is down to 1500, I'll honor every birthday.
2) I'll respond to everything that pops up in my Notifications with either a Like or a message.
3) For the hundred, I'll Share aggressively: news of events, reviews of their books, etc.
4) For the ten, I'll become a great gardener.

And by then I'll have chosen my hundred.

If you've read this and want to remain Friends, it's easy: reach out. Leave a Like or comment so your name comes up. Once I respond, we should start showing on each other's Notifications.

We don't need to be Gorillas to make the most of Facebook.

Posted by glitter noir at 9:42 AM No comments:

I heard the school bells ringing after seven years as a struggling e-book writer--and thirty years after my award-winning hardcover first novel. With fourteen books beneath my belt, the bold thought occurred to me that I shouldn't need to work in a grocery store to pay the rent. 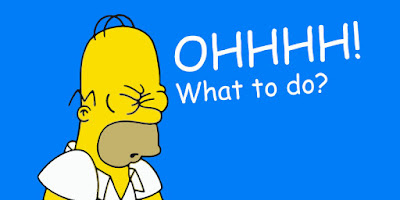 Now, it wasn't as if I'd never asked myself this tough question before. I'd tried different types of books, built up a small readership, experimented different cover artists, learned the imperative of the ground running for all sample readers. My last book received a record, for me, 54 reviews--all 4 and 5 stars. As the first book in a new series, I felt encouraged. I'd stumbled onto something that floated readers' boats. And yet I remained in a grocery store, worried that I'd still be there in another seven years.

Let us segue to a happier note, one sounded out by a king: Russell Blake. 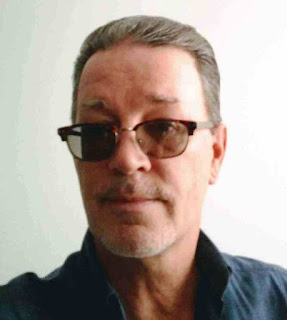 A USA Today bestselling author, Blake has written a half-hundred novels, in almost every genre. Unknown to Russell, on his blog he succeeded in founding a school:

I believe I'm the first of his students. Or I'm the first, at least, to tackle his curriculum systematically and with a vengeance. (I'll provide the links below for your own tuition-free enrollment.)

A stern but compassionate teacher, RB starts with a checklist for his students. When there are no clicks--or when there are clicks that fail to convert into sales--we need to make way through the checklist:
Proper formatting
Cover
Proofreading
Editing
An interesting, unusual story
Riveting opening pages
Etc.

I'd reached a point in my journey where I knew I scored A's on a number of fronts. On the new book, for example, I'd deleted the first 20 pages wherein I'd been clearing my throat--and came on now as if on stage, belting the tune at full force.  I'd used Grammarly Premium to purge the book of typos and punctuation pratfalls. Then I'd solicited feedback from two writers I respect: Brad Strickland and David North-Martino. And J.T. Lindroos' new covers were getting rave reviews.

Okay, okay. That's well and good. But I'm still in a grocery store so I'd better pay better attention to Blake. Where do I still have on a dunce cap? 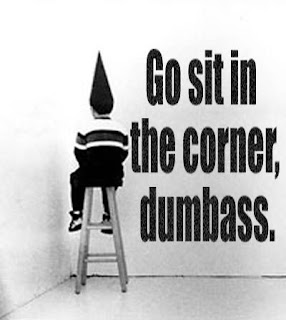 Reading, and rereading Blake's posts, I settled on three weak spots I needed to address: product blurb, Amazon campaigns, professional ad agency assistance. Since I can't tackle all three at once, I decided to start with the first.
vow
The blurb--or elevator pitch--is where, I hate to say: 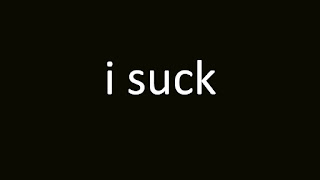 Some pitch as naturally as others breathe. But Professor Blake enabled me to face my pitching suckiness and vow: "I'll pay someone to beat you!"

Today I followed Blake's lead and engaged the services of

That's it for now. I'll keep you posted on the blurb results if there's any interest. 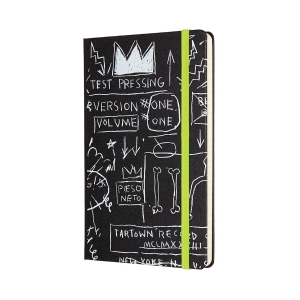 Let's try something different here: a completely random and spontaneous collection of thoughts about writing and the writer's life. In no particular order today...

Few of those who know us personally can believe that we might have real talent or maybe something greater still. Almost everyone thinks about writing a book--and what a beauty it will be! But they never get around to it for a few hundred reasons. The writers they love are all strangers, blessed not with more talent but more money and time and connections. They're not marred by our own flaws or plagued by our personal demons. So it's possible to admire their work and find within it an excuse for procrastinating or giving up completely.

Never judge a book by its cover? Puh-leeeeeze! We don't have much choice these days with a million-odd books coming out every year. The covers are a wilderness of signs coming at us at dizzying speed. Recently, a stranger sent me two of her self-published books as a prize for a contest I'd thoughtlessly entered. To this day I haven't read them. I gave one of the two a five-page look and the pages weren't bad. But I couldn't get past the two bland boilerplate front covers or the amateurish copy on the back. The covers discouraged me from reading on, and made me doubt the author's commitment to her craft or her ability to deliver the goods.

From Russell Blake, I learned the importance of redoing covers, if necessary, until we get them right. I tried doing my own when I started publishing online. Since then, I've redone all of them, sometimes more than once. Yes, it costs money, but the dough is well spent. After all, readers deserve our best and we're being judged at a glance. 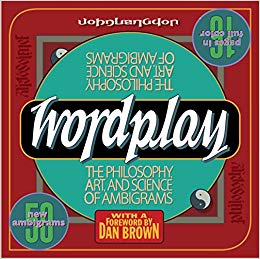 We're told to steer clear of wordplay or verbal pyrotechnics, a word we also shouldn't use cuz some might have to look it up. The stated theory is this: nothing should distract the reader's attention from the story itself. I say the 'stated theory' because I have my own theory: that those who hold this are quick to condemn what they lack. And what's that? Not a sense of humor, certainly. I mean a mental quickness, the power to perceive and to pounce on connections that many others miss.

Come on, really. After all, one of the greatest literary thrillers dared to rope us in with this:L

'Lolita, light of my life, fire of my loins. My sin, my soul. Lo-lee-ta: the tip of the tongue taking a trip of three steps down the palate to tap, at three, on the teeth. Lo. Lee. Ta.'
--Nabokov

Moving on now. We all know the importance of proofing our work carefully. No, more than carefully: obsessively! And so we try harder...and harder...proofing 5, 6, 7 times! Still, time and again, more of the damned little beasties slipped through: a missing or a double period, a typo, a computer glitch, etc. Even the most tolerant readers will come to regard these as sand in their eyes, each grain a further betrayal of trust. 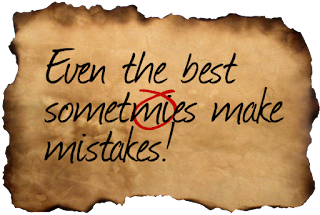 In my continuing education, I tried two experiments. And here is my report:
1) The free version of Grammarly will do wonders for your essential proofing, from typos to spellos to word wrongos to missing Oxford commas.
2) But Grammarly Premium is the one to get, even if you have an editor. GP will reduce your real editor's work, thereby reducing your cost. It will point out if a word or phrase is tired. If a word should be missing, and thus not picked up by Spellcheck, it will question the sense of the sentence. It will offer alternatives to a word that doesn't seem quite on the button.

That said, when the manuscript has been put through GP,  I've learned the imperative of having beta readers who are familiar with my work. Nothing is better than that kind of beta for catching inconsistencies within a series of books or for pointing out back story needed--and back story that can be shortened or scrapped.

One final point, for now, on rewriting. This new book has taught me that it's only in part about cutting. My final draft is always about half the original length. But in my quest for pith, I learned, now and then I scrapped things that readers had to know: a character's reaction, for instance, or a telling detail. 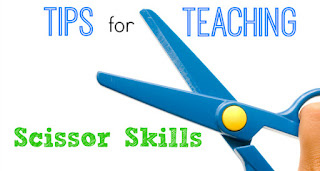 In the book, Starr is 'working' the town bouncer in a bar. She lies in claiming that her husband often can't perform at night. The bouncer commiserates. He knows what she means, he says, though his definition of ED couldn't be more wrong. In the original text, Starr says only, "That's it."

Readers, I'd thought, would see a droll, superior look in Starrs's eyes. But, in fact, they were just as likely to think Starr didn't know any better.

I added instead of subtracting:
Starr cries as if enlightened, "Right! I should've guessed it's got a name!"

Not perfect, no, but clearer.

Well, that's it for today. If the interest is there, we'll come back to this notebook again. Then I'll tell you how the receipt of a blue plastic item dovetailed with my research for the next book and kickstarted the outline. It's an explosive illustration of synchronicity in writing.

Posted by glitter noir at 12:31 PM No comments: