Binge-Free and Lovin' It

In the last post, 'Not Tonight, Dear--I'm Not Binge-ing'--we took a look at TV Binge-watching and considered the negative side of devouring entire seasons. I laid out what I think are the main advantages of watching episodes on a weekly basis.

If you work and have a life, you may be interested in my own recovery program.

Yes, I know this means that I'll have to wait another full year to view the 5th season of Homeland. But I also avoid the massive temptations that come with having DVR--and feeling the need to watch every damned show I've recorded.

2) As a working writer who also works, I've had to devise a strict budget for my viewing time.

3) Though I can easily obtain full seasons of shows on DVD, I need to be highly selective, since seasons run anywhere from 8-22 episodes. There are only so many shows that I can fit into my schedule--and there are next to no long-running shows that I have the time to follow through 6 or seven seasons. 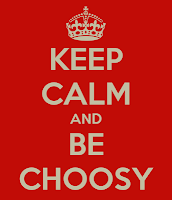 Well, yes, that's all well and good. Perimeters are groovy things. But what exactly does MacRath Way, my own form of recovery, entail?

No, no, don't be alarmed. I don't suggest that you actually buy bullets--though some shows deserve a quick shot in the head. Substitute images of DVDs for the ammo above. The larger the selection, the better--ideally, something for any mood. Also, some network shows can be watched on Amazon's Instant View the day after they air. Add Netflix or Hulu, and you've got a broad base to select from. 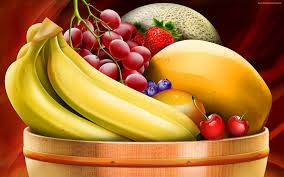 Your weekly viewing diet may include one or two 2-hour films (split up into halves, if required), one or two 1-hour shows...and a half-hour episode from a classic series for when you're pressed for time. 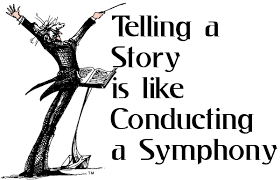 Yes, and watching a story should be like listening to a symphony. We don't speed forward to the Good Parts or attempt to devour it whole. We enjoy it as it unfolds. And if it's a long one that plays in three parts, we attend on different evenings as the composer intended.

1) 1-2 films weekly, broken into halves, and chosen from a collection of roughly 90 DVDs: everything from Mel Gibson's Hamlet to Rear Window to the Lethal Weapon Collection to Apocalypto to Diabolique to James Bond...
2) Two favorite shows I'm rewatching: one episode of each per week.

3) For my 'short night', one half-hour episode from this classic Western series:

The Payoff of MacRath Way

I enjoy a rich sense of rhythm and fullness. Prison Break, in its entirety, would take over 90 hours to binge watch. The second season's 22 episodes will take me five months to watch--and I look forward to each one, as I did when the show aired (with no down time between shows). House of Card's 13 episodes will take me three wonderful months, Furthermore, I'll prolong my pleasure through anticipation--taking time off between seasons to watch a different show.

Some might say I'm missing much. But I'm prepared to pay that price, controlling what, how and when I watch.

Posted by glitter noir at 5:30 AM No comments:

Not Tonight, Dear--I'm Not Binge-ing: 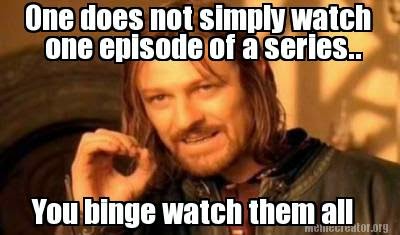 There are three types of binge TV watchers. And over time most of us can say that we have been all three.

Deceptive, even innocent, the Circumstantial Binger may lack funds for cable or the purchase of new DVDs. Or s/he may be in an emotional groove where nothing will do but an old favorite show. So the CB will happily rewatch all 4 seasons of Prison Break or 6 seasons of The Good Wife before the crazy itch is satisfied. Then, with the new TV season or bigger bucks for new DVDs, the CB returns to normal excess viewing of a fresh spate of shows.

More poignantly, the Van Winkle Binger discovers a classic TV show that s'he had never heard of or couldn't be bothered to watch. Suddenly, finding the greatness s/he's missed and faced with the Everest of episodes compromising the show's 7-10 seasons, s/he digs in half-helplessly. S'he has no choice but to watch nothing except Breaking Bad, show after show for six seasons. Do that or remain incomplete.

Then, finally, the new season arrives--released in its entirety in a single drop. Or, finally, the last season is available on Instant View for those who don't have cable:

You've waited sooooo long, you're soooooo hooked, you can't stop. And the best 12-13 episode shows are so perfectly plotted and paced that you simply have to devour them whole in only a couple of sittings.

Think of the world's greatest pizza, delivered to your home, a magnificent pie that's intended for six.

You've been waiting a year for this pizza, drooling at the thought of it, and you could eat enough for 12, let alone for six. So you devour one slice, scarcely chewing...then another...and a third...And before you know it, God help you, not a crumb remains. You're so overloaded that you can scarcely stand. And you'll be sick for days.

The answer to that plight is easy: eat our pizza by the slice. 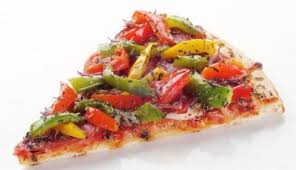 Take time to chew and digest it...and, just as important, enjoy it. We may enjoy a second slice--but we don't eat the whole damned pie in a single sitting. Not without expecting real Elvis-style grief on 'the throne'. And yet we're content to binge on a dozen or more episodes far better enjoyed at a helping per week.

If our focus is purely on learning, as fast as we can, what happens next, maybe we're missing the heart of the experience: fully savoring each episode while we await the next.

In part 2 I'll tell you my own strategy for enjoying a varied, binge-free viewing life on a schedule that allows only about an hour per night.

Till then, be free and tell yourselves: 'A slice a day'll do me.'

Posted by glitter noir at 2:00 PM No comments:

For the past two weeks I've worked on special project of just 1000 words. And they're coming your way soon.

Saturday, September 12, I'll spring the result in my monthly slot on Authors Electric.

These 1000 words came to obsess me. And my goals as a writer had never seemed as clear: 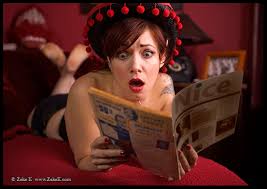 And, yes, to set tongues wagging: 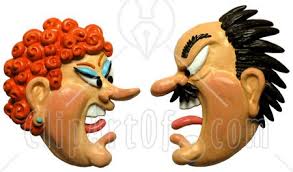 Posted by glitter noir at 2:03 PM No comments: