An Old Book Made Young Again

My first novel The Suiting came out of nowhere and went on to pick up a Stoker Award back in the late 80s. The book was blessed with an elegant cover that suggested the horror beneath the gift box and the catchy pen name Kelley Wilde. 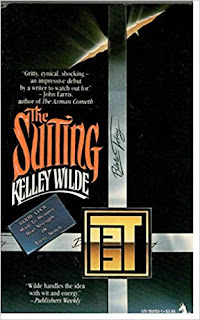 It had its moment in the sun--or, say, the horror midnight: it was optioned for film and cited as one of the 100 most influential horror novels.

But after three more horror novels, when the market began to dry up, I set out to write my real first love: noir mysteries and suspense. New pen name. New ambitions. But...

After publishing a half-dozen new books online, I decided to reissue at least a couple of the Kelley Wilde novels, bringing them up to my standards today. For the revised 25th Anny edition of The Suiting I did a massive rewrite and wanted to try a new cover. I still hadn't tried a pro designer and was doing my own with the help of friends. This is what we came up with, believing a manga-style would do the job: 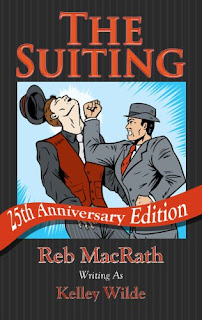 Well, I can be a stubborn bastard even when a cover doesn't win a single sale. But in the past few years I've learned the importance of professionally designed book covers. And recently I confessed to having been a meatball and asked my new designer, J.T. Lindroos, to have a try.

We agreed to steer clear of both the original cover's gift box and the manga-style approach. J.T's first attempt was good enough for almost any horror novel: 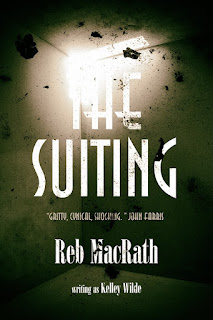 But it didn't quite work for me. I wanted something suggesting the beauty and elegance of the stolen haunted suit...and the horror it contains. J.T. came back shortly with a pair of stunning designs: 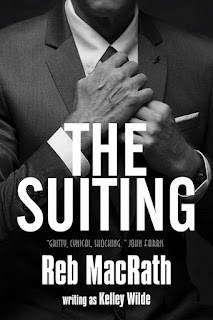 I loved the first. But except for the pitchfork vein design on the back of that right hand, there is no suggestion of horror. Or of the style that I call Glitter Noir. Anticipating my reservation, he'd also sent this second take: 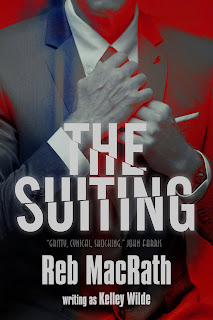 And there it is: the story, the theme and the style at a glance.

I will sin no further by deigning my own covers.

P.S. If you haven't read The Suiting yet, check out its sassy rejuvenated self.

https://www.amazon.com/Suiting-Anniversary-Horror-Novels-written-ebook/dp/B00ERSSWCY
Posted by glitter noir at 1:10 PM No comments:

MoviePass: Too Much of a Crazy Good Thing 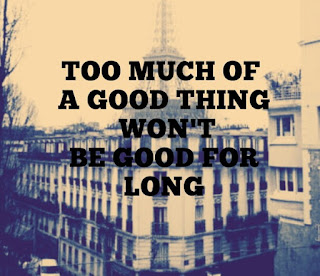 Not to kick a good thing when it's down, even a crazy good thing, but I signed up for MoviePass...then canceled in disgust after futilely trying to use it. I'd taken a Lyft to the theater, since I had to be within a hundred yards on order to check in. No problem there, I was excited by thoughts of the big bucks I'd be saving if I wanted to see a movie a day for each month. Holy wow!

But the app didn't work at the theater. The film and time were shown--but I could not check in. Nor could I get any information from the app--which I learned later was having an outage. Could I contact MoviePass by phone? Uh-uh. The message said they were too busy to take calls.

My first experience with the app and MP's customer service soured me to the extent that I followed the ticket cashier's advice and considered their new AMC Stubs/A-List program. I reviewed the brochure, did some checking online...then checked for complaints against MP. This wasn't the first app outage, I learned, and their customer service received almost universal thumbs down.

I canceled with MP and signed up with AMC's A-List program...and I'm here to tell you I'm glad that I did.

MP's $9.95 monthly fee is half of AMC's fee, it's true. And MP offers a movie a day instead of 3 movies a week. But if you have anything resembling a life, how many films can you see? No, no. Forget 'can'. How many films do you really want to see? And to see these films, are you willing to travel across town on the off-chance that the damned app might be working?

Here's something I think of as much as the math: reasons to go to the theater for movies that aren't big screen blockbusters. AMC's first class approach rings all of right bells for me. I'll pay the charge for the convenience of being able to reserve tickets on my phone and waltz straight into the theater rather queuing in to purchase 'coach' tickets. There are no  blackout periods on hot new arrivals and no restrictions on premium formats: IMAX, 3D, Dolby.

Hats off, from me, to AMC with hopes that it keeps bringing me back to a great joy I'd lost: 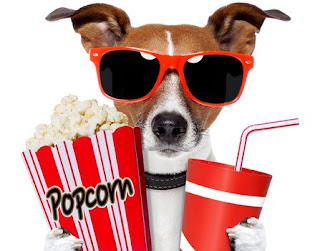 Posted by glitter noir at 11:47 AM No comments: