You know what it's like. At least you do if you have favorite authors who are extemely prolific. Tending to one list, you let your others fall behind. Then, in turn, you turn to another...And so on and so forth. Soon enough, you've fallen behind on nearly of them. And you have that sinking feeling: How can you ever get caught up with X or Y or Z? You're ready to play Reading Bingo. 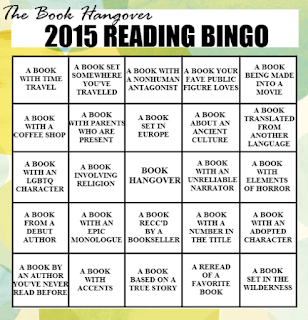 Your frustration is compounded when you're hooked on several series. In my case, I got hooked on Claude Bouchard's Vigilante series: loving their quirky wit, shocking twists and stylish prose. At the same time, I admired two series by Russell Blake, who's capable of writing 8 or 9 novels a year. And I do like to try to keep up with James Patterson,,,Michael Connelly...Harlan Coben...Robert Crais...and on and on and on.

This would be no problem if I were Pam Stack, capable of reading 400 novels a year.

But aside from reading, I work full-time and write a few hours each day.

Which brings us back to Claude Bouchard, whose 13th Vigilante novel has just hit the online shelf. 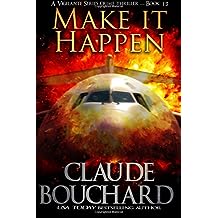 The subject interests me and I really dig the fact that CB took his time with this, refusing to hurry the novel along. But I drifted about midway through the series--blame that on Russell Blake--and in time I starting wondering if I could recover from Series Interruptus.

Still, now that I'd written a number of standalone Boss MacTavin mysteries...and have just finished a new spinoff series...I wanted to approach CB's #13 as a new reader--and see how cleverly and carefully he brings a new reader into the fold.

Step one: today I ordered a Kindle Sample.  Tonight, I'll see if the sample compels me to part with cold cash.

Then, if all goes well: my end report of this book as a standalone...how it works as such--and why...and if it succeeds in sending me back to #6.

Till then.
Posted by glitter noir at 1:47 PM No comments:

Noir at the Bar Seattle

It was the first time I'd set foot in a bar in over thirty years. And it left me wanting to shout three words I'd sworn would never again pass my lips: 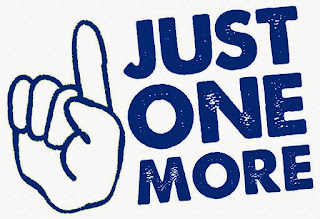 But I hadn't gone to Seattle's Hotel Sorrento to drink. In fact, back in my drinking days, its Fireside Room wouldn't have been my kind of joint. A bit too rooty-tooty, I'd have thought, for a swaggering tough like myself. 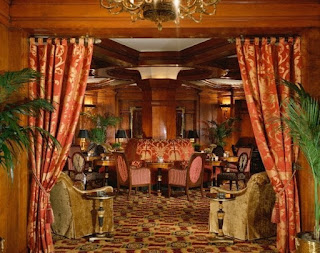 The old time decor might have been fine--I'd have told you way back when--for Phillip Marlowe or Sam Spade but not for a fan of Bukowski or the Stones. But, older and dry now for decades, I was not only reading Chandler, Hammett, MacDonald et al...I'd written five mysteries and started my sixth. 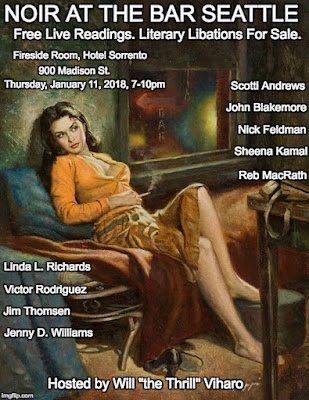 It's hard to know where to start with the praise. But let me start with the room and the vibes. Instead of  the average horror or fantasy convention, the atmosphere evoked the genre perfectly. And, yes, Spade, Marlowe or Archer would have felt at home there. So did the crowd of readers and writers who'd come to celebrate Noir.

The lineup included writers at the start of their careers and those who've been around the track--not to say older--like me. And readings ranged mostly from 5-10 minutes. Just one exception, really, that ran close to twenty--but still held the room captive. 5-10, though, seemed ideal--enough to give a fair taste of our wares and leave them wanting more.

I left with the names of ten writers, including the host Will Viharo, whose work I'll be reading in the next few months. I also left with the joyous sense that I'd connected with readers who weren't there to party or fatten their bank of connections but to celebrate this genre with other kindred souls.

One of those ten names isn't listed on the above poster. Jim Thomsen had had to cancel at the last minute...and was replaced by Pearce Hansen, author of Street Raised and other classic cult mysteries. Ironically, Pearce had been living in Seattle but was moving out the next day. We talked briefly and exchanged books. I hope to keep in touch with him because, in a short time, we bonded.

One closing note: high praise for Will (The Thrill) Viharo, who kept it all running like a fine Swiss watch. Thanks, Will.

And oh, just one last final note: in the many years I've been writing, last night was the closest I've come to feeling I'd made my way home. 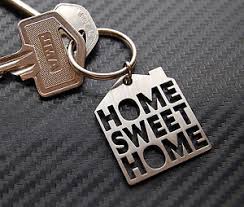 Posted by glitter noir at 10:55 AM No comments: